We have been sharing the fruits of our research at a series of project events around Wales since 2014, accompanied by a touring exhibition. Members of the project team have represented the project at international conferences and also given talks for local societies. 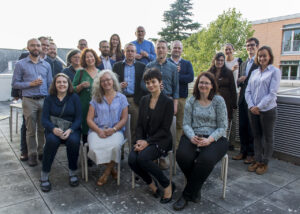 This two-day conference brought together a wide range of scholars to present recent work on Latin and Welsh saints’ Lives.

The project organised three full sessions at Leeds International Medieval Congress on 1 July 2019, including papers by past and present members of the project team.

Further papers by the project team that were relevant to the project were also presented at the 16th International Congress of Celtic Studies in Bangor on 25 and 26 July.

Gloucester Abbey and the Lives of the Welsh Saints 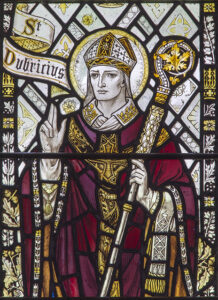 An afternoon of talks on the connections between Gloucester and the collection of legendary material concerning Welsh saints. A surviving Life of Dyfrig, adopted as co-patron of Llandaff Cathedral, was rewritten in Gloucester, and other Lives of Welsh saints are thought to have been composed in either the priories of Monmouth or Brecon, but arguably based on material compiled at Gloucester. Further saints’ Lives were recorded in a medieval legendary originating in Leominster, the third volume of which is now held in Gloucester Cathedral Library.

St Asaph, St Kentigern and the Saints of Wales

The Saints of Llandaff

An afternoon of talks presenting work in progress on saints in Wales. The speakers presented new research on the Book of Llandaff, Lives of Welsh saints, including Dyfrig, Teilo and Euddogwy, patrons of Llandaff Cathedral, and stained glass in the building.

Stories of the Saints 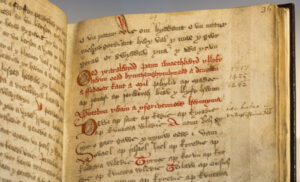 This day conference presented the research from a four-year project editing Welsh Lives, poetry and genealogies of saints in Wales, and launched a new research project on the Latin Lives of Welsh saints.

Padarn and the Saints of Wales

An afternoon of talks about St Padarn and the saints of Wales, drawing on evidence from medieval literature, place names and visual culture.

Organised by the ‘Cult of Saints in Wales’ project, University of Wales Centre for Advanced Welsh and Celtic Studies in cooperation with St. Padarn’s Church, Llanbadarn Fawr, and the St Padarn Team 517–2017.

Stories of the Saints Exhibition

A series of talks and events coincided with the ‘Stories of the Saints‘ exhibition at the National Library of Wales. David Parsons gave a lunchtime talk at the Library on 1 March, ‘Chwedlau’r llan: seintiau Cymru o Benfro i’r Fflint’, and both David and Martin Crampin gave gallery talks on 29 March. Martin also delivered a lunchtime lecture on 17 May and a one-day conference was held at the Library on 3 June.

The project held a full session at this international conference (Saints in Wales), including papers by Jane Cartwright, Jenny Day and Martin Crampin, chaired by Janet Burton.

An afternoon of talks on St Winefride and Holywell. Subjects included the medieval Life of Winefride, medieval poetry to the saint, and the importance of the well to visitors in the Romantic period. There was also a talk on St Winefride’s well with an opportunity to visit the site. 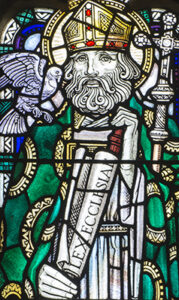 An afternoon of talks presenting work in progress on saints in medieval Wales. The subjects included the different Welsh versions of the Life of David and the poem to David by Gwynfardd Brycheiniog, as well as images of David and place-names in Pembrokeshire relating to saints.

An afternoon of talks presenting work in progress on saints in medieval Wales. The subjects included the Welsh Life of St Mary Magdalene, the Life of St Illtud, place-names in Glamorgan relating to saints and images of saints in stained glass and sculpture. 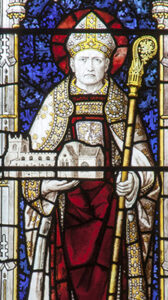 An afternoon of talks presenting work in progress on saints in medieval Wales. The subjects included new research on local saints, the genealogies of the Welsh saints, and a tour of the cathedral to see images of saints in stained glass.

For more on Martin’s paper, and another for the ‘The Middle Ages in the Modern World‘ conference at the University of Lincoln, see his blog post.

Medieval Breconshire and the Welsh Poets

As part of a day-conference on Medieval Breconshire and the Welsh Poets, Eurig Salisbury asked ‘Sut i gael 42 o seintiau mewn un gerdd? Moliant Huw Cae Llwyd i seintiau Brycheiniog’ (How do you get 42 saints into one poem? Huw Cae Llwyd’s praise for the saints of Brycheiniog).

Conference: The Cult of Saints in Wales – Sources and Contexts 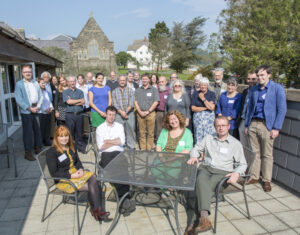 This conference was held as part of the AHRC-funded ‘The Cult of Saints in Wales: Medieval Welsh-language Sources and their Transmission’. The principal aim of the project is to produce an electronic edition of the poetry addressed to saints, the prose lives, and the saints’ genealogies which make up the Welsh-language hagiographical corpus.

At the conference some of these texts were examined and discussed; the aim being to locate them in a wide range of contexts. At its broadest, the theme encompasses the whole range of local responses to hagiography across Celtic-speaking countries, Britain and Europe.